By definition, all thunderstorms contain lightning. Lightning is a giant spark of electricity that occurs within the atmosphere or between the atmosphere and the ground. As lightning passes through the air, it heats the air rapidly to a temperature of about 50,000 degrees Fahrenheit, considerably hotter than the surface of the sun. During a lightning discharge, the sudden heating of the air causes it to expand rapidly. After the discharge, the air contracts quickly as it cools back to a normal temperature. This rapid expansion and contraction of the air causes a shock wave that we hear as thunder (this shock wave can damage walls and break glass). 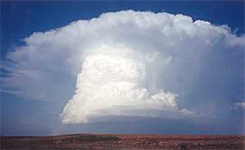 All thunderstorms go through various stages of growth, development, electrification, and dissipation. The process of thunderstorm development often begins early in the day when the sun heats the air near the ground and pockets of warmer air starts to rise in the atmosphere. When these pockets reach a certain level in the atmosphere, cumulus clouds start to form. Continued heating can cause these clouds to grow vertically upward into the atmosphere. These "towering cumulus" clouds may be one of the first indications of a developing thunderstorm. The final stage of development occurs as the top of the cloud becomes anvil-shaped.

In the negative cloud-to-ground flash, an almost invisible, negatively-charged channel of air forms near the cloud base and surges downward toward the ground. As this "step leader" approaches the ground, streamers of positive charge shoot upward from trees, buildings, and other objects on the ground. When these streamers meet the step leader, the connection is complete, and a surge of electrical current moves from the ground to the cloud causing the visible "return stroke" that we call lightning. The entire process takes only a matter of a seconds.

The process for a positive flash is similar except that a positive channel usually originates in the anvil of the storm and surges downward. In this case, streamers of negative charge shoot up to meet positively-charged channel as it approaches the ground. When a connection is made, a positive flash of lightning occurs. 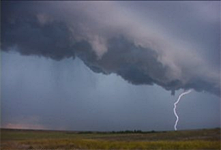 The greatest danger associated with the positive flashes, however, is that they strike in areas where most people think they are safe from the storm. They generally strike well beyond the area where rain is falling and well beyond the main area where most of the lightning (negative flashes) and thunder is occurring. Consequently, many victims are caught completely off guard.

The best advice in order to minimize your risk of becoming a lightning victim is to get to a safe shelter sooner and to stay there longer. In general, if you can hear thunder, you are within striking distance of the storm.