What on Earth is Evapotranspiration?

The evaporation component of ET is comprised of the return of water back to the atmosphere through direct evaporative loss from the soil surface, standing water (depression storage), and water on surfaces (intercepted water) such as leaves and/or roofs. Transpired water is that which is used by vegetation and subsequently lost to the atmosphere as vapor. The water generally enters the plant through the root zone, is used for various biophysiological functions including photosynthesis, and then passes back to the atmosphere through the leaf stomates. Transpiration will stop if the vegetation becomes stressed to the wilting point, which is the point in which there is insufficient water left in the soil for a plant to transpire, or if the plant to atmosphere vapor concentration gradient becomes prohibitive to plant physiological processes (e.g. photosynthesis).

Estimates of average nationwide evapotranspiration for the conterminous United States range from about 40 percent of the average annual precipitation in the Northwest and Northeast to close to 100 percent in the Southwest. During a drought, the significance of evapotranspiration is magnified, because evapotranspiration continues to deplete the limited remaining water supplies in lakes and streams and the soil.

The lower 5 miles of the atmosphere transports an average of about 40,000 billion gallons of water vapor over the conterminous United States each day. Slightly more than 10 percent of this moisture, however, is precipitated as rain, sleet, hail, or snow. The greatest proportion, about 67 percent, is returned to the atmosphere through evapotranspiration. About 29 percent is discharged from the conterminous United States as surface-water flowing into the Pacific and Atlantic Oceans and across the borders into Canada and Mexico, about 2 percent is discharged as groundwater outflow, and about 2 percent is consumed by people, animals, plants, and used for industrial and commercial processes. For most of the United States, evaporation returns less moisture to the atmosphere than does transpiration. Globally, evaporation processes are resposible for an overwhelming majority of the water returned to the atmosphere.


Evapotranspiration and the Water Cycle 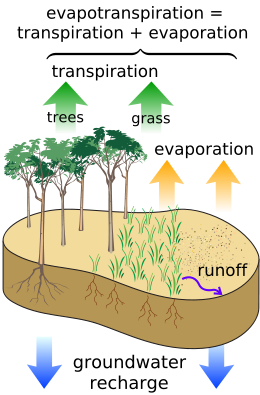 Evapotranspiration is a significant water loss from a watershed. Types of vegetation and land use significantly affect evapotranspiration, and therefore the amount of water leaving a watershed. Because water transpired through leaves comes from the roots, plants with deep reaching roots can more constantly transpire water. Thus herbaceous plants transpire less than woody plants because herbaceous plants usually lack a deep taproot. Also, woody plants keep their structure over long winters while herbaceous plants must grow up from seed in the spring in seasonal climates, and will contribute almost nothing to evapotranspiration in the spring. Conifer forests tend to have much higher rates of evapotranspiration than deciduous forests.This is because their needles give them superior surface area, resulting in more pores for transpiration, and allowing for more droplets of rain to be suspended in and around the needles and branches, where some of the droplets can then be evaporated. Factors that affect evapotranspiration include the plant's growth stage or level of maturity, percentage of soil cover, solar radiation, humidity, temperature, and wind.

In areas that are not irrigated, actual evapotranspiration is usually no greater than precipitation, with some buffer in time depending on the soil's ability to hold water. It will usually be less because some water will be lost due to percolation or surface runoff. An exception is areas with high water tables, where capillary action can cause water from the groundwater to rise through the soil matrix to the surface. If potential evapotranspiration is greater than actual precipitation, then soil will dry out, unless irrigation is used.

Evapotranspiration can never be greater than PET, but can be lower if there is not enough water to be evaporated or plants are unable to readily transpire.

The most general and widely used equation for calculating reference ET is the Penman equation. The Penman-Monteith variation is recommended by the Food and Agriculture Organization. The simpler Blaney-Criddle equation was popular in the Western United States for many years but it is not as accurate in regions with higher humidities. Other solutions used includes Makkink, which is simple but must be calibrated to a specific location, and Hargreaves. To convert the reference evapotranspiration to actual crop evapotranspiration, a crop co-efficient and a stress co-efficient must be used.

Monthly estimated potential evapotranspiration and measured pan evaporation for two locations in Hawaii, Hilo and Pahala.Potential evapotranspiration (PET) is the amount of water that could be evaporated and transpired if there was sufficient water available. This demand incorporates the energy available for evaporation and the ability of the lower atmosphere to transport evaporated moisture away from the land surface. PET is higher in the summer, on less cloudy days, and closer to the equator, because of the higher levels of solar radiation that provides the energy for evaporation. PET is also higher on windy days because the evaporated moisture can be quickly moved from the ground of plants, allowing more evaporation to fill its place.

PET is expressed in terms of a depth of water, and can be graphed during the year (see figure). There is usually a pronounced peak in summer, which results from higher temperatures.